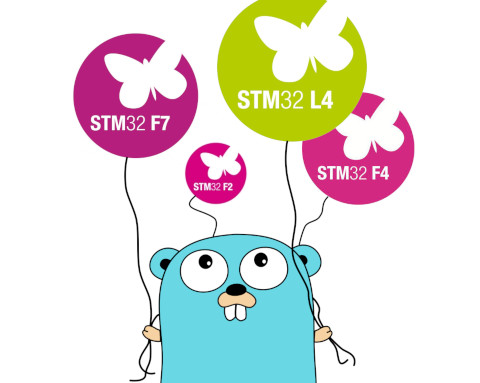 The title of this article refers to my earlier article: Go on very small hardware, where I described the Emgo, Go-like language based on Go to C translation. Now I want to introduce the logical next step: the port of the Go reference compiler (gc) to the not so small microcontrollers. What does “not so small” mean will turn out later in this article.

Over the past dozen months I was concurrently involved in several hobby projects. One of them was an attempt to add support for ARMv7-M instruction set to the Go compiler, with the vague hope that the next step will be slimming down the Go runtime to the size suitable for microcontrollers.

I spent a couple of months exploring the internals of the Go assembler, linker and compiler. The result was a preliminary port for the linux/thumb pair where thumb means the Thumb2 instruction set. This is the only instruction set included in the ARMv7-M ISA. After fixing most of the bugs in the linux/thumb port I’ve started working on the noos/thumb, the port that will be able to generate code for bare-metal ARM microcontrollers (Cortex-M3, M4, M7, etc. without any OS on the board).

The whole fascinating history of the both stages is worth another article. Here, I will just give you simple step by step recipe on how to compile and run your first Go program on the ARM microcontroller, in particular on the STM32F407 which is the heart of the popular STM32F4-Discovery kit. 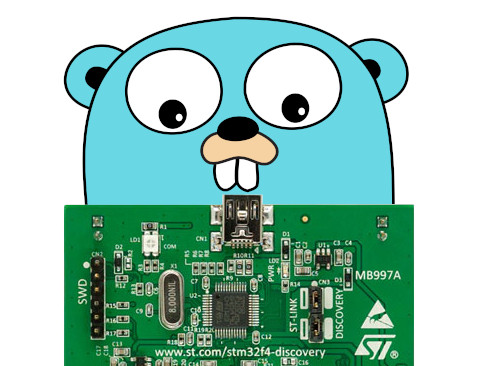 The programming environment will be based on the original Go compiler patched for the noos/thumb target and on a set of scripts and libraries from github.com/embeddedgo

If you’ve never built the Go compiler from source then don’t worry because it is an easy and fast process. Compilation of the whole Go together with the standard libraries takes less than 2 minutes on my desktop PC. This is incomparably faster than compiling GCC or LLVM which can take from about 30 minutes to a few hours depending on the speed of your computer.

The whole procedure of instaling Go from source is fully described here. In the following parts of this article I assume that you’ve managed to follow the instruction and your newly built Go toolchain is now located in $HOME/goroot.

Downloading the necessary components of embeddedgo

For the following steps we will need:

Adding support for noos/thumb to the Go compiler

The following commands will add the noos/thumb target to your Go compiler:

Now you have the ready to use go1.14.5 with added support for linux/thumb, noos/thumb, noos/riscv64 GOOS/GOARCH pairs. You can run tests for your native architecture to ensure that nothing was broken:

You can always revert all changes and return back to the clean go1.14.5 using the following commands:

Building an running the example program

The embeddedgo/stm32/devboard directory contains example programs for several development boards. In the following steps we’ll use the blinky example for the STM32F4-Discovery kit. 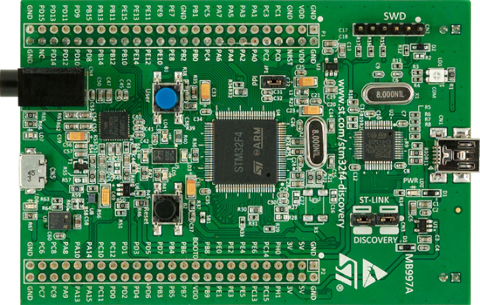 As every devboard from ST the F4-Discovery includes ST-LINK programmer so you can simply connect its mini-USB port to a free USB port in your PC.

The hardware part of the programmer is done but we still neeed to handle the software part. You need to install OpenOCD or Texane’s stlink and in case of Linux add some udev rules.

It is also advisable (required for Texane’s stlink) to install binary utilities for ARM Cortex-A/R/M processors:

The blinky example blinks all LEDs on the board with speed dependent on the button state:

As a result you get blinky.elf binary.

The build.sh script is a smart wrapper over the go build command. You can use go build directly this way:

The build.sh does some more for interrupt handling code but this is a topic for another article.

If you have the nevest version of a F4-Discovery which is equipped with ST-LINK/V2-A programmer you can simply copy ELF file to the provided FAT filesystem:

As you’ve probably noticed, loading takes some time. The ST-LINK isn’t the fastest programmer under the sun but let’s see where it really comes from:

And now we can tell what not so small means, at least when it comes to Flash. As you can see the smallest MCU you can consider should have 640 KB of Flash (our Discovery board has 1MB).

Let’s compare this with a similar program in Emgo:

The difference is significant. Let’s see what eats our Flash:

The biggest one is the pclntab: 208 KB. Others visible here (with T or r flag) togheter consume just 18 KB.

What about RAM? The BSS and DATA segments together take 13 KB but majority of memory in Go is allocated dynamically. We need to see the allocator statistics but that’s for another article.

At the end, let’s make a little modification of our program:

As you can see, OpenOCD allows you to see debug messages and I don’t have to convince anyone that it’s a very useful feature. You need to install itmsplit to see anything.

How complete is this port?

The compiler, assembler, disassembler, linker and runtime are all usable but still not tested too much. There is no support for FPU but should be quite easy to do. The compiler recognizes three GOARM values: 7: soft-float (default), 7F, 7D: reserved for two floating-point modes.

Some tests for linux/thumb still fail. They are all related to trecebacks and the problem probably lies in the fact that in Thumb mode the function address in memory differs from its call addres (the LSBit in the call addres is set). I fixed many such tests but those few I leave for later.

The os package is not ported yet. We have GOOS set to noos and I’m still not sure how to approach this. This is rather philosophical (less technical) problem and requires some reflection. We probably need something like a virtual file system but the case remains open.

Update 2020-02-17: there is a stub implementation of os and syscall packages that allows to compile other ones. There is a port of time package from Emgo which you can use in place of the original one:

You can use git commands to easly revert any change so experiment without fear.